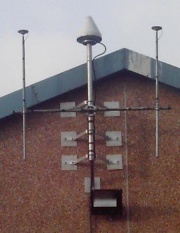 Active Stations are GPS receivers which constantly write Receiver Independent Exchange Format (RINEX) data out to the Ordnance Survey OS Net website. The files are publically downloadable, and allow measurements taken in the field to be post-processed for greater accuracy.

The Active Station network came online in early 2000. Most early stations were placed in pairs and had TRIMBLE 4000SSI receivers with conical antennae in small arrays, though freestanding Leica CRS1000 and Ashtech UZ-12 receivers were also used.

A major upgrade to the active network was started in December 2008 when most active stations were equipped with GNSS-enabled receivers with single dome-shaped antennae such as the Leica GRX1200 or AR25. More recently, the slimmer Leica AR10 has been installed, also the Trimble TRM55971 featuring a small flat plate. Since 2018, new Septentrio PolaRx5 receivers have been installed on some sites. The OS antenna offset page lists some current models

Log files for current and discontinued stations are available from BIGF (British Isles continuous GNSS Facility) as is a map of current stations. Active stations maintained by bodies other than the Ordnance Survey, referred to as 'Scientific Stations', are also listed here.

As at November 2022 Trigpointing UK lists 180 Active Stations, approximately 25% of these are destroyed stations.