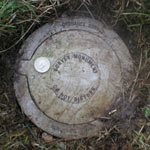 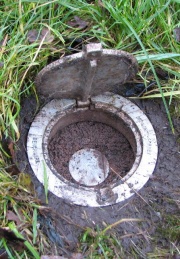 Berntsen is an American manufacturer of survey equipment. 102 of the Passive stations installed by the OS used a survey marker from Berntsen, all but 2 are designated by the OS as FBM Auxiliaries. Logs from TP:UK are available.

Details from the manufacturer available here.

The trig mark / datum point is located under the lid and is typically a 5cm domed disc. However, a simpler, centre punched rod has sometimes been used, as noted below. The lid bears the inscription "SURVEY MONUMENT DO NOT DISTURB" and some, but not all, are also inscribed "ORDNANCE SURVEY". Berntsens are typically located in grassy roadside verges and are not deliberately buried.

The installation of an OS Berntsen is desribed as follows:

"The Berntsen markers come in various forms but the OS ones where generally thus,
(please note these were/are not made just for OS, anyone can purchase these.
Hence you may well find ones that are not OS installed).

A hole is augured first to a depth of about 2 foot (1 foot diameter),
with a second smaller hole drilled in the centre from the bottom of
the first augured hole deeper into the soil by about another 2 foot.
A sleeve is then inserted into the augured hole.

To cut a long story short an extendable pin is then driven into the
ground until it reaches the required depth or will drive no further.

The rod is then cut off to where you want the datum to be
(usually 2 or 3 inches below ground level).

A grease filled 3 sided fin is then inserted over the rod.

The hole is then backfilled with washed sand and a cover to protect the point is added."
[1]

Several Surface Block Passive stations have Berntsens which have been discovered within a few metres of them. It is unknown whether they were installed by the Ordnance Survey, but as far as is known, none of these Berntsens have their own Station Number. Possibly these were installed by non-OS surveyors when the OS mark was not accessible. Examples include:-