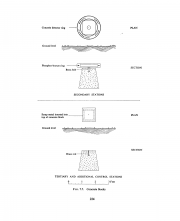 A 'Block' is a concrete block approx 1 cu ft in dimension emplaced such that the top surface is at ground level. A bolt, with head diameters measured to date between 3/4" and 2 3/8", is fixed at the centre of the upper face of the block. Over time surface soil, vegetation, etc can build up resulting in the block being several inches below ground level.

For a general description of a 'Buried Block' see 'Block' above. 'Buried Blocks' were designed to be buried below ground level (0.6m is an indication of the depth), however, they can be found much closer to the surface. A tool known as a searcher was used by the OS to help relocate the trig mark. At some point the OS experimented with introducing a ferrous substance (iron filings?) into the concrete mix of some buried blocks[Citation needed] in order to use a metal detector to aid in locating these trigs. Apparently it wasn't very successful. A different relocation technique was to cover the block with a metal sheet, for example Long Hill [1]. Another was to embed scrap metal into the block, for example Sniperley Farm [2].

An emplacement ring, known to trig baggers as a Concrete Ring, was sometimes installed above a buried block. It could assist in locating a trig mark, but is not in itself a mark.