From TrigpointingUK
(Redirected from Brass Plate)
Jump to: navigation, search

Installed by HMS survey ships mainly around the coast of Scotland, with 1 recorded to date on the Welsh coast. Their known number is gradually increasing as more are found. As at Sep 2022 there are 33 listed in trigpointing.uk 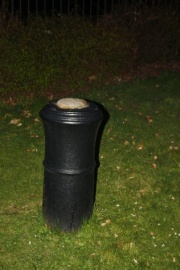 Approx 1" diameter pipe set upright and mortared into rock, protruding sub 1". There are 21 listed on T:UK, all in Scotland.

Pre 2022 there was only 1 possible finding recorded on T:UK, subsequently confirmed, Meall Ard on Islay [3]. During 2022 several others on Islay were found.