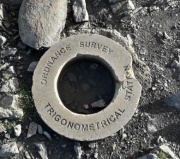 The replacement Concrete Ring at Blencathra

'Concrete Ring' is a trig bagger's term denoting a feature of some buried blocks seen in Lakes/Northern Pennines and elsewhere. Typically, the ring is approx 15" internal and 21" external diameter. It usually bears the inscription "Ordnance Survey Trigonometrical Station" although this may be eroded or absent. The ring is placed loosely above the block. The block itself typically has a central, slightly conical bolt of approx 3" diameter. Occasionally, a ring may be used to mark a buried bolt set into bedrock, for example, Brownsey Moor. Infrequently, the trig mark may be a rod instead of a bolt, for example, Stonesdale Moor.

Initially, when very few examples of concrete rings had been rediscovered, they were considered by some baggers to be a decorative feature, lacking a functional use. Subsequently, it was understood that they were identical to the OS term Emplacement Ring (or Detector Ring) as described in Section 7.032 and Fig 7.7 of [1] as follows:

When used as a secondary station a phosphor-bronze ring was buried with the block so as to enable it to be detected by mine detectors if the locating description should prove insufficient. With the lower order stations these rings were replaced by scrap iron incorporated in the block itself.

Some, but not all, concrete rings have an embedded metal ring (originally phosphor-bronze, subsequently iron). With the use of a metal detector the emplacement ring can assist in locating a trig mark, but is not in itself a mark. It was discovered quite late on that the manufacturer decided to leave out the metal ring to save money. Hence many rings are just concrete [2].

The OS online records do not identify which blocks have emplacement rings, hence it is not known how many exist. The paper-based OS Office files (held at The National Archives) and Field files are understood to record this information although not systematically [3].

A photo album of concrete rings is available from T:UK, where a listing can also be accessed.

In 2018 the Concrete Ring on the buried block at Saddleback, located at the summit of Blencathra, was reported missing, presumed stolen. A replica was installed in early 2019 and has since suffered minor damage. The ring for Moss Farm was also lost, a few months after its rediscovery.

Since the number of rings emplaced is not known these stats may be not be based on a representative sample.