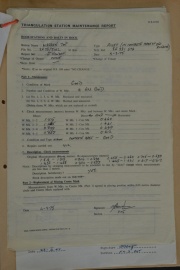 OS sketch listing WMs set in a concrete base

A Witness Mark (sometimes abbreviated to WM) is a physical mark which can be used to accurately restore the horizontal position of a trig in the event of its destruction. This allows the original station coordinates to be used without the need to re-observe the trig. [1]

In the case of a triangulation pillar, this function is performed by the lower centre mark.

In the case of bolts and rivets, multiple witness marks might be installed. Their position would be recorded on the location sketch for the trig.

For example, the passive station at Upper Heyden has three witness marks: a brass rivet, a cross-cut and an arrow incised in the rock. In the case of Whetstone, multiple pipe nails (sometimes abbreviated to PN or P/N) have been inserted into the tops of nearby fence posts. Pipe nails are so called because they were commonly used to nail old downcomer pipes to masonry. They were short (50 to 60mms) nails about 8mm in diameter with a welded washer just below the head [2]. Peel Monument has 4 rivets.

Photo 20 in [3] is captioned 'Marking sites for witness marks' and relates to the bolt installed on the roof of a building at Leeds University in 1947.