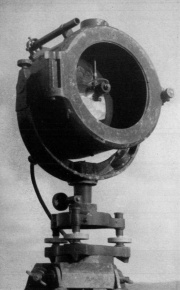 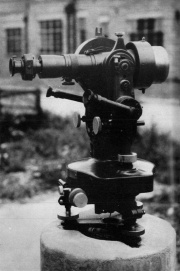 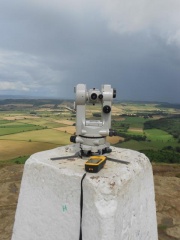 Theodolites are used to measure the angles between the trigpoint they are mounted on and the other trigpoints visible from it. The feet of the theodolite sit in the Spider and the axis of rotation of the instrument is accurately plumbed over the Upper centre mark. Sightings were made to beacon lamps or "lights" mounted on the remote trigpoints.

The first order measurements were carried out using Geodetic Tavistock theodolites, manufactured by Messrs. Cooke, Troughton & Simms, of London and York. This theodolite had been used successfully in East Africa on the arc of the 30th meridian, so it was natural that the same instrument should be selected for the Retriangulation. [1]

A total of 12 theodolites were purchased in 1936 for the retriangulation, with a further 10 later models being purchased in 1946. Three of the original batch were buried near Dunkirk, shortly before the 19th Field Survey Company were evacuated, but could not be found again after the war's end!

Most secondary and tertiary measurements were carried out with the same theodolites used for the primary stations. However for some tertiary stations the small (3A") Tavistock theodolite was employed. [2]