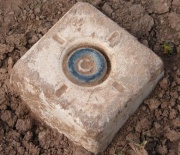 A Feno Marker is a type of survey marker, developed by the French company Faynot, which is quick to install and well anchored [1]. 15 instances occur in the OSGB36 list [2] of which 10 are 13th order - GPS. All were installed between 1987 and 1989. A listing is available from T:UK

6 of these marks have been recorded as destroyed:

Cattlelaith Lane (2 marks),
Kings Standard Hill (1987),
Spitalgap Lane (2 marks of which one destroyed, the other not found),
Gibbet Hill

5 are thought to be missing:

2 recorded as not found:

The installation of a Fenomark has been described as follows: "Apart from the obvious yellow, white or whatever colour block at the top, the mark itself is a hollow rod of variable length. Within the rod are three strands of galvanised rod about 5mms in diameter. After the rod is driven onto the ground a tool is driven down the centre of the tube which drives the 3 rods out the bottom. These are designed to twist and provide a corkscrew anchor into the soil. Consequently ... very difficult to extract. The system was originally developed in France for anchors for grape vine wires." [3]

Fenomarks in the UK are not exclusive to the OS. For example, they can be found along the S bank of the Humber estuary, E of the bridge, where they may have been placed by the National Rivers Authority (NRA).